The Endocannabinoid system, or eCS, is a complex cell-signaling system that we still do not fully understand. What we know so far is that it plays a role in regulating the body’s range of functions such as sleep, memory, mood and appetite. The eCS is made up of CB1 and CB2 receptors. These receptors play key roles within the body’s endocannabinoid system. It sounds a bit confusing; I know. Let’s break it down!

The eCS is a necessary system for the body to regulate homeostasis and it is active in everyone, regardless of their cannabis consumption. It consists of 3 main components:

In order to achieve a naturally balanced state of being, our bodies produce endocannabinoids which interact with CB1 and CB2 receptors. However, plants can also produce cannabinoids, like the THC in weed. Phytocannabinoids come from plants and they can also interact with our eCS. 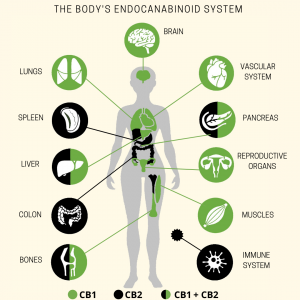 What is a CB1 receptor

The brain, central nervous system, lungs, liver, and kidneys all contain CB1 receptors. The body produces two prominent endocannabinoids. Both endocannabinoids bind to CB1 receptors to help maintain homeostasis. However, you can also think of the CB1 receptor as the THC receptor; it is responsible for the intoxicating affects associated with the use of marijuana. More on that later. 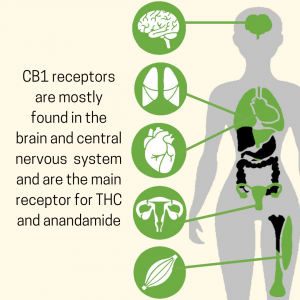 What is a CB2 Receptor?

Immune cells, which circulate through the body and brain via the bloodstream contain CB2 receptors. The spleen, liver and bone cells are also loaded with CB2 receptors. AND there are some brain cells that seem to express CB2 receptors in response to inflammation and injury. Still with me? 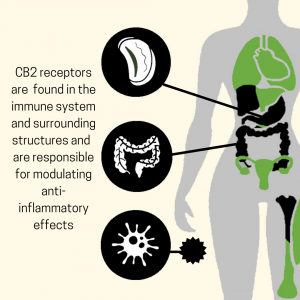 How do they work?

Both CB1 and CB2 receptors cover the wall of a cell with their binding side facing outward like a lock waiting for its key. When cannabinoids bind to the receptors, G-proteins, located on the inside of the cell, bind to the tails of the receptor which then act to deliver certain messages. The CB1 receptor’s major role in the brain is to regulate the release of neurotransmitters such as serotonin, dopamine, and glutamate. While, the CB2 receptors primarily regulate inflammation and cell development and survival. Got it? 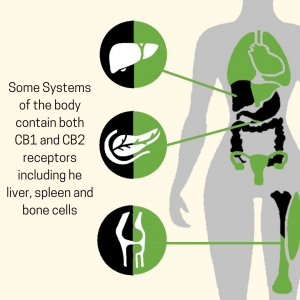 How does THC affect the eCS?

THC found in marijuana is an agonist for CB1 and CB2, meaning, it mimics endocannabinoids produced by the body. Most cannabinoids can bind to both the CB1 & CB2 receptors. This is true for both endocannabinoids mentioned earlier, and for Phytocannabinoids like THC. This means that when a CB1 receptor is ‘unlocked’ by THC the result can range from therapeutic to hindering. The characteristic euphoric high associated with THC is because the CB1 receptor influences the dopamine transmission throughout the brain. The brain’s top-down control of pain also involves the CB1 receptor, which explains why THC is so effective for pain management.

How does CBD affect the eCS?

Unlike THC, CBD is an antagonist for CB1 and CB2 so It blocks cannabinoid receptors rather than activating them. In essence, CBD interacts with the way the receptors bind with THC, counteracting its psychoactive effects. However, beyond the endocannabinoid receptors, CBD activates other receptors and ion channels that can have a whole host of positive effects on the body. For instance, it can activate a specific serotonin receptor that helps alleviate symptoms such as anxiety, nausea, vomiting, and the perception of pain.

Not unlike our good friend cannabis, the eCS is a complicated beast and it may require years of research to fully understand its complex relationship with Phytocannabinoids. However, from the information we have gleaned so far, the physical benefits of THC and CBD seem pretty undeniable.